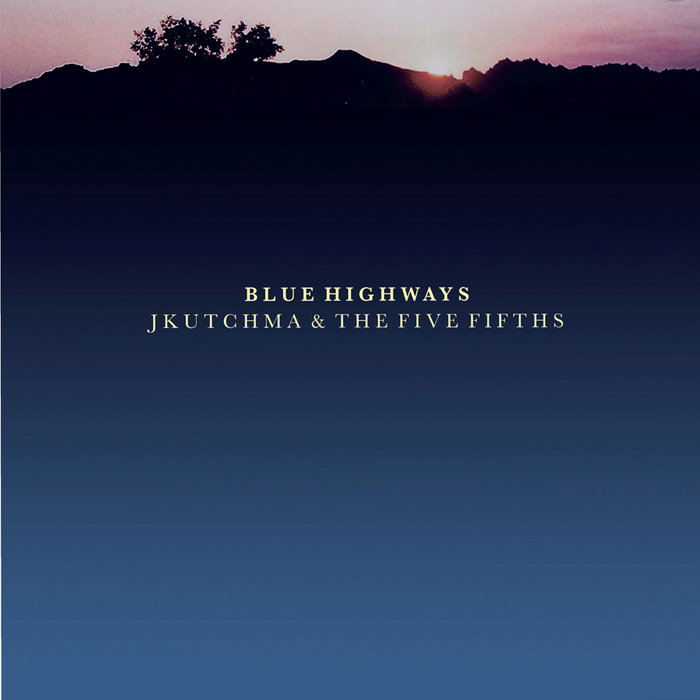 When Daniel Boone goes by, at night,
The phantom deer arise
And all lost, wild America
Is burning in their eyes


Great road records take us with them, conjuring not just the places they go, but the headspace those places evoke. And the very best road records take us on the inner journey that led the author to pack their bags in the first place. Like hitchhikers, we ride shotgun as the musician undergoes whatever personal changes road trips engender that make them such transformative — and familiar — American rites of passage.

-John Schacht
Right At Home On the Great Divide


Last Chance Records presents the fourth album from Durham, NC’s Jason Kutchma. Building on his previous efforts of Pastorals and Sundown USA, Blue Highways is an engaging work of spacious Americana, an Edward Hopper painting presented as three interwoven pieces: an album, a book and a film.

Inspired by the road trip novels of John Steinbeck, William Least-Heat Moon and the photography of Robert Frank, Blue Highways is an album cinematic in nature. With nine songs that play over the course of one forty-minute track, Kutchma explores the lives of characters who have found themselves with unsatisfied wanderlust.


On the old highway maps of America, the main routes were red and the back roads blue. Now even the colors are changing. But in those brevities just before dawn and a little after dusk – times neither day or night – the old roads return to the sky some of its color. Then, in truth, they carry a mysterious cast of blue, and it’s that time when the pull of the blue highway is strongest, when the open road is a beckoning, a strangeness, a place where a man can lose himself.


On the night of a total lunar eclipse, a blood moon beginning Passover, the nine members of JKutchma & The Five Fifths loaded their gear into a massive former textile mill located in downtown Durham, North Carolina. Aside from some minor instrumentation and vocal work they recorded Blue Highways in a very intense twelve-hour session, one that started just before dusk and ended right before dawn.


Once a journey is designed, equipped, and put in process, a new factor enters and takes over. A trip, a safari, an exploration, is an entity, different from all other journeys. It has personality, temperament, individuality, uniqueness. A journey is a person in itself; no two are alike. And all plans, safeguards, policing, and coercion are fruitless. We find after years of struggle that we do not take a trip; a trip takes us.

John Steinbeck
Travels With Charley: In Search of America
1962


This is an album for a road trip that starts when that weird crepuscular blue starts creeping in, just before the sun’s rise or set. For some journeys, the destination and routing may not be known though the desire to go is. Road trips are not vacations. We can't rewind or fast forward to our favorite parts of a road trip. They can't be paused or stopped. It must all be taken in its singular entirety.

Though Blue Highways is intended to be listened to as one continuous 40 minute track, it is also available in a Singles version:


Blue Highways was recorded almost entirely over the course of one night in April, 2014. We did some vocal overdubs and some percussion parts a few weeks later, but the vast majority of the record happened that night. Nine of us loaded our gear into the second floor of an old textile mill, a cavernous 200,000 square foot open space, and set up in a circle. Nick loaded in his recording gear, put up mics, and did his best to minimize bleed, but it would be mostly on us to not step on each other’s toes. No lights, no running water, just some drop cords and a couple floor lamps. The sun set around 7:30pm and we just started playing the songs. If something felt off, if someone missed something, we played it again. We finished up around 5:30 or 6:00am, with just a vague light creeping into the sky to the east, birds already a riot as we descended the shaky fire escape. It felt, for all the world, like we’d started somewhere and ended up somewhere else.
-EKR


Tall thin cowboy rolling butt outside Madison Square Garden New York for rodeo season, sad, spindly, unbelievable - Long shot of night road arrowing forlorn into immensities and flat of impossible-to-believe America in New Mexico under the prisoner’s moon - under the whang whang guitar star - Haggard old frowsy dames of Los Angeles leaning peering out the right front window of Old Paw’s car on a Sunday night gawking and criticising to explain Amerikay to little children in the spattered back seat - tattooed guy sleeping on grass in park in Cleveland snoring dead to the world on a Sunday afternoon with too many balloons and sailboats.


Nowhere is that blue tapped into more than on the suite’s final cut, “Neighbors,” which reads as the most autobiographical song. Sung over plangent piano chords and with tremendous emotion and soul, Kutchma delivers the line “All of my neighbors know who I am/Cause I’m the one screaming at midnight/’I think I can’” with so much conviction the song reads like a confessional. To add to the sense of late-night desperation, Kutchma ends the song mid-verse with an abruptness so jarring that it initially seems unintentional. Not so, he says —that’s just the witching hour, the time to get gone.


When our van pulls up in front of my house to pick me up for tour, it is the most beautiful automobile in the world. Too hot in the summer, too cold in the winter, an unapologetic gas guzzler, no airbags, no aux input on the radio (which is a radio full stop), back windows covered from the inside with wood-grain contact paper giving the appearance of a van delivering 1200 gallons of pudding, and comically unsafe; when it heaves up at the curb it is the boat I want to work on. It’s not freedom or escape, no particular thing guaranteed for climbing aboard. It is the promise of every part of your day having one purpose: pull up to an address and do your job as a musician. The hundreds of moments every day that lead up to that one thing—blown tires, thrift stores, coffee and a banana in a parking lot while you wait for a towel to dry in the sun--are part of the thing itself. Not roadblocks or rewards but an integral and essential part of being a touring musician. Part fixer, part crisis negotiator, part long-haul driver with time to think, part auto mechanic, photographer, writer, chef of cuisine which can be wholly prepared inside a van, electrician, player of rock shows, every night: this is the best job. It pays very badly, it is sometimes hard on your sleep and your back, but it is the best.

The songs you should probably know by now. Everything else that happens around those 45 minutes is also your job, and it is the best job.

It is the best job because every time you come home you will be different. You will know how to do a thing, or where you can find something in a town you might never see again, what it’s like to take shelter under the loading area of a home improvement store because doppler radar indicated a possible tornado crossing the highway before the exit after this one, pull off, pull off here. You come home more patient, more accepting, more open. That creaky primer-gray van when it pulls up is full of that, and it’s beautiful.
-EKR


“That was in Crescent City, California, up near the Oregon border. I left soon after. But today I was thinking of that place, Crescent City, and my attempt at a new life there with my wife, and how even then, in the chair that morning, I had made up my mind to leave and not look back. I recalled the calm I felt when I closed my eyes and let the fingers move through my hair, the sadness in those fingers, the hair already starting to grow again.”


The 40-minute film accompanying this album is available for streaming or download here:

Special thanks to Sean Thegan and Rick Prelinger